UKFL team Tails We Win regained the European Flyball record this weekend at the Storm Chasers competition at Oswestry, the second time they  have broken the record at that venue.  The previous weekend the Belgian team Roadrunners ran 14.59 to take the record, which had been held by Tails for over 3 years.  Tails managed a superb 14.53.  The team line up was Shannon Bobbi Harvey ran Salam start, Ross Payne and Kenickie 2nd,  Megan Lamont and Wiggie  3rd with Helen Welch running Ginny anchor.   Side bar, Ginny happens to be Wiggie’s sister.  It is all the more remarkable as Ginny was drafted in at the last minute as height dog. Both Kenickie and Ginny are owned by Helen Welch, wow lucky Helen owning 2 of the 4 dogs in the team.  A quote from Ross, “the right words are hard to come by to explain the feeling of breaking a record in the A team.  It is mentally exhausting. the pressure and expectations,  all come into play.  Sometimes what looks so easy on paper is practically impossible on the day.  you might try and fail a thousand times, as when by our original 14.64 standing for over 3 years.  The emotion of finally piecing everything together and seeing, hearing and feeling that occasion is a high like I cannot describe. 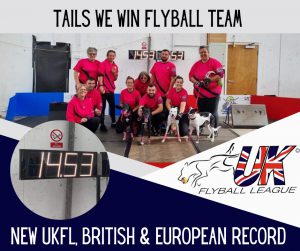